HQ2 and Amazon and Seattle Housing

Many of us here in Seattle have been waiting for the news about the new HQ2 for Amazon. The bigger question has been how it will impact Seattle housing costs. Now that the locations have been announced, it appears that Seattle housing will probably not be impacted in the near future. Both New York and Virginia have housing costs that are equal to the Seattle area and both areas also have state income taxes as well as high corporate taxes. Most current employees will not be moving for cheaper housing. The real draw in both cases is most likely the access to talent. In Seattle Amazon has 8,200 jobs listed but there were only 3.200 people in King County actively searching for jobs. Amazon is still hiring here in Seattle and is planning to continue expanding in Seattle and in Bellevue.

The good news about the housing here in Seattle continues to be more inventory and dropping prices. We're starting to see a more balanced market and this will make a better market for buyers in the new year. 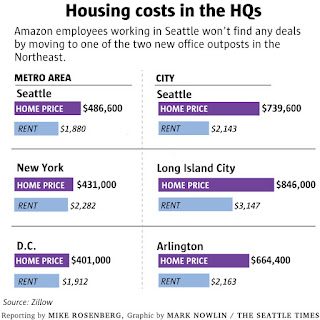