The Boundaries of a Breakup

Facebook and how to get or lose your "friends"...interesting article. Ok, it's an old article, but I just found my note on a scrap of paper, and wanted to share it here in November....so here it is!
Posted by D.Lisa at 10:24 AM No comments:

Lawsuits over advertising are up. Just look at how Verizon and At&T changed theirs...
Posted by D.Lisa at 10:20 AM No comments:

The Oldest People on the Street

The other day I was feeling old, creaky, and just plain worn out. (That's right, I am only in my fifties)...then I looked out the window, and caught a glimpse of my neighbor, an older woman (in her 80's who is Norwegian. At one recent block party we all remarked that while we may get older and die, she'll be re-roofing her house and outliving us all. She showed up to that event with a party platter, cut meats cheeses, lefse that she made herself, and gave all a jar of homemade jam.
So, as I limped to the window, imagine my shame as I saw this gal outside, in her boots and rain gear, hauling around her hose. I thought, what? She is washing her house? It turns out she was washing her windows, outside with a long handled contraption I can only think she made herself in her basement. Here is what she looked like: 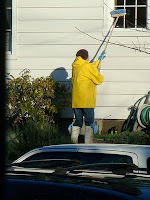 The New York Times had this little essay by Michael Winerip on a similar line of thinking.

Really, I heard that there was a "sports" team at the local high school that plays this imaginary Harry Potter game, kids running with their (flying) broomsticks between their legs. The girls that made the announcements in the morning were scolded for giggling when announcing this sport and their practice times.
Now, I am reading the New York Times and this article from Lauren Edelson, from Portland, Oregon, mentions the disturbing phenomenon.
Posted by D.Lisa at 11:22 AM No comments: 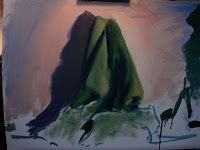 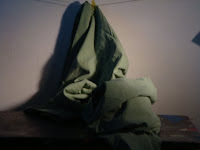 Gary Faigin showed his Still Life Painting Atelier last week how to render fabric, and how to determine what folds and wrinkles should be not included to make the image read well.
Posted by D.Lisa at 11:32 AM No comments: